A Computer, a Seat and the Sky 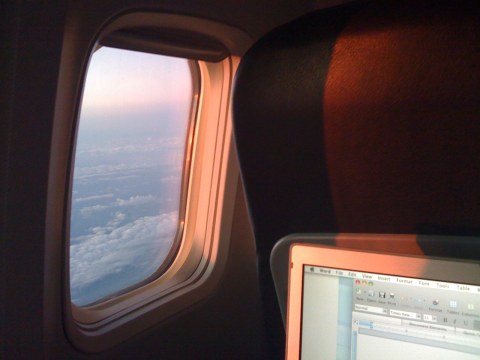 Early yesterday morning Katherine drove me to the airport for an overnight meeting in Atlanta.  When it comes to travel the overnight meetings are my favorites.  Extended stays are a real drag – being away from the family is no fun.  Nevertheless, the meeting (denominational) had to take place and I had to be there (we delude ourselves into thinking that entire denominations stand or fall on whether or not we show up for meetings…).

The picture on the blog was taken from my seat on the flight.  It represents what these trips are to me – a computer, a seat and the sky.  To my thinking meetings are what we do because of the Fall – necessary evils due to Adam’s lack of self-control!

What doesn’t appear in the picture is the man who was seated next to me.  Truth be told, when it comes to strangers it takes time for me to break the ice.  However, within fifteen minutes we had exchanged enough information that leaves one feeling as though they have known another for longer than the short time they actually have.

Sitting next to him, I was reminded of what Patrick, our Director of Youth Ministries, once said when he offered a brilliant formula for what it means to live out the Gospel in a broken world.  While a group of us on Staff attempted to sculpt the perfect mix of words, Patrick offered that it simply means ‘to love the next person on our path.’

Actually this is the detail in the parable of the Good Samaritan (Luke 15) that I suspect we may easily overlook – that our generous friend in Jesus’ story gained celebrity simply because he cared for the next person he came upon (a Jew – and previously an enemy – who happened to have been left for dead after having been robbed and savagely beaten).  Had he taken an alternative route to Jerusalem he would just have been another Samaritan on another path – but he went that way – and on that path there was someone God had brought his way.

Thinking in more personal terms, at some point in our lives, we were the next person in someone else’s path – a parent – a teacher – a friend – a sibling – a pastor…  What matters is that somewhere and at some juncture in our lives, someone was Christ to us because we were simply the next person.

I’d like to say that my new friend gained some deep revelation to the Gospel because he sat next to me on that jet – but the reality is that he fell asleep fifteen minutes after we met, and when he woke up it was time for us to land (you might say, just in time for the Benediction).  Later, last evening, I got with friends who attended the same meeting – friends I would not have expected to get time with before taking that flight.

Even now as I sit in one of the very meetings I had dreaded – the ones that have predictably failed to surprise with anything that remotely resembles ‘interesting’ – I don’t feel so strongly that this has been time wasted – and I am reminded that the old adage is true – that it isn’t only about the destination, but also the journey.  In fact, I have come to realize that because our destiny is certain – in Christ – until we go ‘home,’ it is all about the journey – the people we encounter, the decisions we make, the pits we fall into – all of it.

As we travel toward what we expect, God surprises us with what we could never anticipate by putting people on our paths – and we on theirs (even if they do fall asleep fifteen minutes after meeting us), and somehow He redeems even dreaded meetings as we find that those ‘incidental’ encounters on the way were the reason He set us out in the first place.

§ One Response to A Computer, a Seat and the Sky

You are currently reading A Computer, a Seat and the Sky at unfinished1.