Redemption in the Ruins 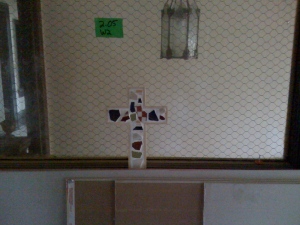 The Cross in this picture was taken at a local property that is being restored for the purpose of housing women in recovery who need a fresh start and a safe place to make it.  The property is sprawling.  One day the grounds will display a garden that will grow herbs and vegetables cultivated for the purpose of training in the culinary arts.

The buildings are a different story – they are historic and beautiful, and one day will be housing and serve as classrooms for these women, but for now they are also old and in near disrepair.  Squatters filled the condemned halls that long went without water and electricity.  What once was obviously a magnificent spread of stately edifices is now in ruins.

Work teams have been scheduled year-round for the purpose of restoration, and it was while a group from our church worked in one of the buildings that I saw the Cross.  It was situated on the edge of two or three panels of dry wall that awaited their destined installation.  How and why it got there is a mystery, yet somehow it spoke volumes to me.

It is Holy Week.  We celebrate Jesus.  In describing His death, we think and speak in terms of Sacrifice and Substitution – both packed with meaning.  But this week I have been struck by the level of intimacy Jesus was willing to involve Himself in on our behalf.  We celebrate that He came and entered into our mess.  In Jesus God took on the human condition.

There are moments when I don’t like that intimacy – when I would rather the roof cave in and the walls decay, and the brush to become overgrown than for God to be so close to me that He can detect every nuance of sin’s ugly stain that runs so deep within.  He knows – He sees – There is nothing I can hide – not only because He is God, but also, and especially because Jesus took on flesh and blood – His body to be given and His blood to be spilled – He became a hideous display because that is what humanity is – it is what I am.  I don’t want Him to see me, and perhaps, more, I don’t like that He became me.

There is no sterile version, yet there is no more beautiful one either.  Paul says, ‘God made him who knew no sin to become sin that we might become the righteousness of God’ (2 Corinthians 5:21).  The Cross is a supreme act of intimacy in which sorrow, rejection, death and love conjoined in one man – Jesus.

This is Good News.

You are currently reading Redemption in the Ruins at unfinished1.