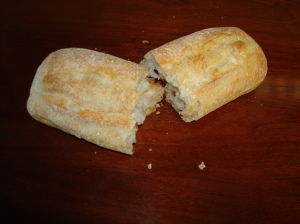 On Sunday we celebrated Easter – the Resurrection of Jesus.  I preached Luke’s account of two travelers joined by the Risen Christ as they made their way home to Emmaus from Jerusalem.  We typically use the event to describe yet another ‘proof’ that Jesus rose from the Grave – one more eyewitness account.  And to be sure, it is a compelling argument.  However I have found that such arguments tend to be more effective as reassurances to those who already believe in Jesus.

There is nothing wrong, and everything right with rehearsing what we have as Christ-followers.  In the Resurrection we are assured that sin has been crushed under the weight of Christ’s Righteousness – that the Grave could not hold Him, and therefore will not hold us in death.  Because Jesus has risen, we will too, and have, because we are His through faith.

But the big story is that in conquering the Grave Jesus authenticated His message that the Kingdom of God had arrived, evidenced in the meal He shared with His new friends in Emmaus.  To fully appreciate this you have to go to the first meal recorded in the Bible – when Adam and Eve ate the forbidden fruit, in the Garden.  The first meal represented the desecration of all God had made and declared to be good.  When Jesus broke that bread and shared that meal, post-resurrection, He signaled a new day – a new hope.  The Son of God had reversed the Curse of the Garden.  Where the ‘first Adam’ (Romans 5) had eaten to our damnation, the ‘second Adam’ ate to our shared Redemption in Him.

What strikes me is that Jesus did so with people who would remain on earth after He ascended into heaven.  He would return home, but they would still face the broken things that define a sin-stained world – and so do we.

Lesslie Newbigin, in his The Good Shepherd, says, “The Church is not an organization of spiritual giants.  It is broken men and women who can lead others to the Cross.”

Perhaps our friends’ eyes were opened when they saw the wounds on Jesus’ hands.  Whatever God used to illuminate them, in that one gesture Jesus demonstrated that a hungry world can catch glimpses of the new heavens and the new earth – not in grand sermons, but in fellow travelers that have met the Risen Christ, and who dare to share the ‘meal’ of love at the table of their lives.

You are currently reading Broken Bread at unfinished1.