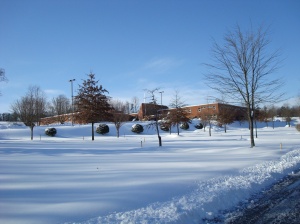 Today we cancelled church. For 36 hours it snowed heavily in what is termed as a ‘Nor-Easter,’ where an arctic blast from the west moves east and collides with a rainy downpour from the south that moves north, resulting in a huge snowstorm. By the time it was done 21 inches had fallen, one of the largest snowfalls in the Greater Baltimore area since the 19th Century.

For those of us who grew up in the tropics it was a treat – It’s hard to imagine that much snow falling in such a short period of time. All our lives we have seen the pictures, and I think that each of us hoped that one day we would experience it. So we’ve taken pictures, cleared the driveway and walkway, played in it, watched the dog revel in it, and just overall enjoyed the entire event. Snow makes Christmas feel very Christmasy.

Not only did I grow up in the tropics (I don’t say, the ‘South’ because Miami isn’t considered part of the historic Southern culture), but I also grew up in the Church. If the church’s doors were open our family was there. There aren’t many certainties in life, but this was one of them. I often joke that my parents would go to Sunday School if Satan taught it – it was just what you did.

So you can imagine how unnatural it felt for us to cancel church this Sunday. But, strangely, it also felt good – it felt good to not have to go, and yet to be okay at the same time – to think in terms of missing a community rather than not acting solely out of obligation.

I think that sometimes we need this kind of thing. One of the worst things to happen to a church’s annual budget is to lose a Sunday in December – and maybe it’s good for that to not be so horrible. One of the most unnatural things for a preacher is to have a message he won’t deliver on Sunday morning – and maybe sometimes he needs his preaching to be canceled into perspective. One of the strangest things is to drive to a church on Sunday, just (as in ‘only,’ and with no other purpose) to take a picture the morning after a record-breaking snowfall.

Here is the thing: Anything we do only because we have to can’t possibly be as good as doing it just because we love to. Don’t get me wrong – I love worshipping on Sunday mornings, and never want to be in the ‘habit’ of giving up the meeting together that God has graced His people with (Hebrews 10:25) – but somewhere deep down in my DNA is that ever-lurking legalistic ‘works righteousness’ that constantly desires to pollute the sweetness of the Gospel with the terrors of hell.

So today we cancelled church. On the most common sense of levels it was the right thing to do. Neighborhoods won’t be cleared for hours and people shouldn’t be in a position of feeling obligated to drive dangerous roads. On a deeper level, though, it was wonderful. The preacher didn’t go to church and God is okay with that. His family is enjoying a day they are marked ‘absent’ on. Later I’ll be at a football game! Church was cancelled and Jesus still loves the Church. Amazing. I preach it. And I believe it. Today, I’m enjoying it. I hope you are too.

You are currently reading Canceling Church at unfinished1.