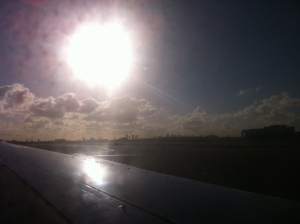 Last week Katherine and I experienced something we never before had. After a weekend in which I performed the wedding ceremony of the daughter of lifelong friends, we packed and were raced to Miami International Airport. MIA was recently voted something to the tune of the sixth worst airport in the US. When in a hurry one wonders which five could possibly be less good! Don’t get me wrong – for me it is home and I love it – the loudness – the languages – the cars and their horns – the café-con-leche, etc. But when in a hurry…

We attempted to check in outside, only to be told that we weren’t in the system! To our dismay we learned the same inside after a well-meaning airline employee took us to the front of the line. So here we were, checked out of our hotel, with bags packed and our ride already 45 minutes away, and we were stuck in the airport. Bill Murray’s role in Groundhog Day came to mind – all we needed was for Sonny and Cher to start singing, I Got You Babe.

And then I asked the simple fatal question – ‘Is our flight tomorrow?’ to which the reservation agent said, ‘Yes.’

We had shown up 24 hours early! Somehow in our hurry we had failed to double-check our schedule. So with bags packed, daughters poised to pick us up in Baltimore, and bodies weary, there we were – stuck in the sixth worst airport in the nation.

Stress and disappointment are strange bedfellows. In tandem they warp reality. In that moment of disappointment and frustration we were left feeling as though the world had ended, when in fact all we had to do was breathe, go to my Mom’s house, and just come back the next day – which we did. The next morning we arrived early at MIA, got to our gate, relaxed, read the paper and then boarded with no sense of urgency.

Bill Murray’s character had to keep waking up each morning until his living nightmare ended, which it did. Doing the next thing often seems like one of those, ‘too little, too late’ types of things, but the scriptures call it ‘walking by faith and not by sight’ (2 Corinthians 5:7). It is walking – one step after another – following Jesus, delighting in the little things and the lovely things of life – and believing that in our journey no event is an end unto itself, but only a step, with people, places, conversations, encounters and opportunities, on the way back home.

Maybe I should just have sung to Katherine…

I got you babe

§ One Response to Groundhog Day @ MIA

You are currently reading Groundhog Day @ MIA at unfinished1.