Hanging Up On God 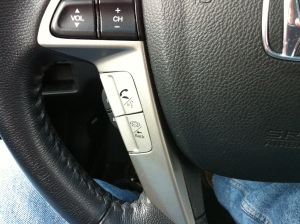 I have the luxury of a Bluetooth connection in my car, which means that when a call comes in, rather than have to pick up the phone, look to see who is calling, and then push buttons – I simply press a button on my steering wheel, and begin to speak into the car sound system, all without taking my eyes off the road. When the conversation is over I merely press another button and the phone disconnects. It is one of those safety features that doubles as a tremendous convenience. Besides, it is a gadget – and I love gadgets…

The other day (actually early Sunday morning), as I made my circuitous way to church (my Sunday routine is to get to the church by 5:45-6:00 AM, having gotten an extra large coffee at Dunkin Donuts), I spent some time in prayer. For some reason, for me, places like the car and the shower are conducive to prayer (what, you thought I only pray in church?), and so on Sunday mornings, this too is part of the routine.

On this particular morning, after a time of prayer, and having said, ‘Amen,’ without thinking, I instinctively pushed the ‘hang-up’ button on my steering wheel, and then immediately burst into laughter after realizing what I had done. It dawned on me that I had just hung up on God! Neither of us had even said, ‘Good bye!’ I hadn’t asked Him what He was doing after church or if there were any good new movies out (which is too bad because I took Katherine to one of the dumbest movies we’ve ever seen the other night and a warning would have been appreciated).

I just hung up.

Can you do that? I guess so. Because I did. I hung up on God! Fortunately it wasn’t one of those hang-ups where you hear the other person’s voice after your finger had passed the point of no return (you know, the kind where you have to play endless phone tag in attempting to call again to acknowledge that you realized they weren’t finished talking). At the moment I hung up neither of us was speaking – so it wasn’t rude – I don’t think. Actually, maybe He was speaking…

All that to say that the hang-up helped jog me back into blogging. The truth is that I actually had hung up on God a bit – not in an angry, deeply rebellious way, but in the sense that my emotional, spiritual and physical energies have been so tapped that I just checked out. It was a good checkout. But it was a better check in.

The crazy thing is that later that day, and every day since, I realized that God hadn’t hung up on me. At the same time that He was ruling, sustaining, breathing life into, protecting, preserving and caring for the Universe, He was also waiting to hear from me again.

The One that promises to never ‘leave nor forsake’ us, was there when I called. I find that to be extremely Good News.

§ 4 Responses to Hanging Up On God

You are currently reading Hanging Up On God at unfinished1.