Why We Celebrate & Why We Grieve 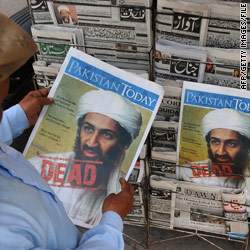 What do we do with the death of Osama bin Laden? He is dead, and if anyone in modern history was desired dead, bin Laden is the man. He, more than any other, is responsible for the loss of life of thousands in the 9/11 terrorist massacre, back in 2001. He, more than any other, was the mouthpiece of one of the most violent expressions of extremism in religion. Many believe him to have been the face of evil.

It might be good here to state a few things: I am proud – of our President, of our Country, of our Armed Forces, and of our resolve. We can get embroiled in all kinds of controversy and criticism, but at the end of the day – for me, a Christ-follower – all I have is the scriptures, and they clearly teach that God has ordained those who lead the nation of which I have citizenship. That’s all I need.

It was gutsy for a Republican President to put a bounty on bin Laden’s head, and it was gutsy for a Democrat President to give the go-ahead on executing the mission that brought him to justice. My advice: Don’t let partisan politics pollute you – It’s ugly and all of it, on both sides of the aisle, gets nasty. It’s better to trust a Sovereign God than put hope in fellow sinners…

So, with that said, how did you react when you heard the news? Did you celebrate? Did you grieve? Were you conflicted? And how are we supposed to respond?

Ezekiel’s prophecy (33:11) offers insight by giving us a glimpse into God’s heart – “As surely as I live, declares the Sovereign LORD, I take no pleasure in the death of the wicked, but rather that they turn from their ways and live…”

Perhaps Martin Luther King put it best in one of my all-time favorite messages, entitled, The Strength to Love – “Returning hate for hate multiplies hate, adding deeper darkness to a night already devoid of stars. Hate cannot drive out hate; only love can do that.”

So is there room to celebrate? I would say yes, absolutely, in fact I personally was thrilled upon discovering of bin Laden’s death. Thrilled because justice was done, and because closure was accomplished for a lot of families. Thrilled because a monster is no longer among us. And thrilled because I was and continue to be overwhelmed with pride in our amazing Armed Forces.

But the Gospel compels me to grieve too, as God grieves. The death of the wicked serves as evidence that something is terribly wrong with our world – it is broken and irreparably damaged by sin. Little boys and girls that grow up to be murderers do so because a world that was created to be lovely has been turned into an incubation chamber for evil.

Why would God not grieve? Why would we not?

So I celebrate… and grieve – But I do so with hope, because my solace is found in the One that took both the reason for and the guilt of a world of sorrow along with the hope of a day when sadness and death would cease, completely upon Himself. I can celebrate Jesus. And that is enough.

There is no better news…

§ 2 Responses to Why We Celebrate & Why We Grieve

You are currently reading Why We Celebrate & Why We Grieve at unfinished1.