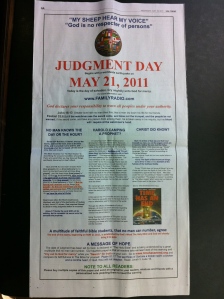 Of our elaborate plans, the end
Of everything that stands, the end
No safety or surprise, the end
I’ll never look into your eyes… again (The Doors)

In case you haven’t heard, the world will end this Saturday, May 21. According to self-proclaimed prophet Harold Camping, ‘Judgment Day’ will come with worldwide earthquakes. A full-page ad appeared this week in USA TODAY warning folks of impending catastrophe. And naturally, with the announcement also came Camping’s rationale for his previous failure in predicting the end of the world.

The problem with predicting ‘The End’ is that Jesus clearly teaches that this isn’t our place – that the Father alone knows how history will end. Shortly before Jesus ascended to heaven His disciples – His closest friends – asked for some inside information on the consummation of time. Jesus responded (Acts 1:7), It is not for you to know the times or dates the Father has set by his own authority. He would proceed to inform them that His Spirit would come and lead and empower them in the mission at hand.

Christ’s admonition wasn’t derived by a devilish pleasure in holding secrets others couldn’t share in. His concern is with becoming preoccupied with ‘The End’ at the expense of the here and now – Here and now where brokenness lives, and where need is palpable to a world damaged by sin – the here and now that cries for someone to enter into sorrow, with hope and not fear.

It is worth visiting some history here. I was raised in churches that saw ‘The End’ in terms of the ‘Last Days’ – that we would one day accompany and assist Jesus in His victory over the wicked. We sang Larry Norman’s, I Wish We’d All Been Ready, and watched movies on the ‘end times,’ while convinced that every symbol in the prophecy of Daniel and book of Revelation could be identified with some event or personality or dynamic in the culture, and thus prove that those times had arrived.

But we were wrong, and our passion was misguided. Jesus didn’t redeem us to decipher the future, rather to trust Him with it while living out the gospel in the present – to collaborate in God’s mission of bringing heaven to earth: An unwarranted kindness, an unexpected act of mercy, the practice of forgiveness, taking pleasure in the lovely things of creation, the culture and arts, compassion on those otherwise ignored or scorned, participation in evangelism, planting churches, restoring communities and cities, and praying for flourishing and peace in a world torn by sin.

All these, and more, reflect the belief that what God will ultimately do, He has already inaugurated in Jesus, and that we have been invited to share in the arrival of His Kingdom – not tomorrow, and not May 21st, but Today.

Friends, this is Good News.

PS – In case you remain unconvinced and are sold that this is the end, and that you have no need to plan past Saturday, then my only question is this: Can I have your stuff?

You are currently reading The End? at unfinished1.