The Feast of Hope 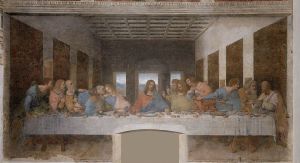 This evening, along with many congregations around the world, our church community will celebrate the night that Jesus met with His disciples in the Upper Room for what is commonly known as, ‘The Last Supper.’ Borrowing from a friend who pastors a church in San Francisco, for the past three years we have celebrated with a soup dinner, worship and the Lord’s Supper. It is a sweet time.

On the most surface of levels that night could not have been more disastrous for Jesus. Not only did He disclose his impending death, but also He had to arbitrate His friends’ objections, internal arguments and despair. Additionally, it was in that room that He confronted His chief betrayer, Judas. Later that evening He would be arrested, and the next day, put to death.

And yet there could not be a more hopeful dinner party than that evening, because in the midst of the sad news, the disappointed friends and the torment to visit Jesus until He died, came a promise: “I tell you, I will not drink of this fruit of the vine from now on until that day when I drink it anew with you in my Father’s kingdom” (Matthew 26:29).

Though His friends could not see it, Jesus assured them – and us – that the end would not be the end, but the beginning that would find its greatest expression in God’s Kingdom. Interestingly this was the one and only feast that we know of Jesus inviting His friends to during His earthly ministry. This was His feast. I suspect that the food was incredible.

But it was only a taste. And by instituting the Lord’s Supper, He assured us that until the Kingdom comes and He once again sits with us, He will be our Feast.

Jesus will always be enough. What good news.

§ 3 Responses to The Feast of Hope

You are currently reading The Feast of Hope at unfinished1.