Reflecting on Life, Ferguson & the Gospel… 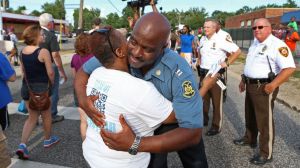 “Pray for me, guys. The situation in Ferguson is bringing out the worst in me, and I don’t like what I’m seeing.”

I’m a white guy who grew up in Miami in a mostly white world that was shaped by white tastes, white opinions and white culture. Everyone else had to fit in, and it never occurred to me that this could be wrong.

I can’t remember ever thinking that the streets, our neighborhood or my world, were anything other than perfectly safe. And because I was safe and happy, I just assumed everyone else was.

Injustice wasn’t even on my radar, until a friend in ministry opened my eyes. I’ve been catching up ever since, and am far from an authority.

When my studies floundered, I was still believed in and considered full of potential. Contrast this to Malcolm X, a bright-eyed, super-achieving high school student, whose joy was demolished when a teacher scoffed at the notion that he, an African-American, would aspire to a future that involved being anything other than a janitor.

Earlier this week a coworker and I conversed about issues unearthed by the events in Ferguson. He’s black and I’m white. It was good – we just talked. And we agreed on the need to take the conversation to another level.

Random Thoughts I Scratched throughout the Week…

I have to think that the symbolic, anecdotal, mass-media-driven vitriol takes us nowhere good – It has to be personal, because it is.

Sin is never excusable. Period. Figure out the rest, but if you put a color to your conclusions, you’re missing the point.

There are more civilly minded and community-loving people than not (don’t think color – think people).

There are more good cops than bad ones.

There are more bad politicians than good ones (hey, this is my blog – I can say what I want, but term limits would dramatically help).

Violence is almost never the answer, and victims abound when it occurs.

Not merely with words, but in communal life, will the Church make a difference…

There is no ‘Them’

Right now I don’t like my world very much.

But God created it to be good. And the gospel informs me that everything that disturbs me is less about ‘it’ and ‘them,’ and more about what is in me.

The fact is that I have no idea what went down in Ferguson. But whatever it was, the images have excavated fears, preconceived notions, and prejudices that either I didn’t know existed – or worse, that I never before wanted to admit.

And I don’t know what to do with this other than to pray… and listen.

All the while holding on to the promise that Jesus, the One who entered into the mess that is our world, and actually loved it, is making everything new, until heaven and earth are one, and the nations gather at the throne, where lions and lambs and infants and cobras dwell safely together in peace.

It is the good news that sustains…

§ One Response to Reflecting on Life, Ferguson & the Gospel…

You are currently reading Reflecting on Life, Ferguson & the Gospel… at unfinished1.