“Imagine… what it might be like if God were deeply feared by many Americans, not as a top-down government policy, but as a bottom-up grassroots reality.” Charles Drew, Body Broken

One of the more thoughtful pieces I have read in recent weeks comes from New York Times op-ed columnist, Nicholas Kristof. In this particular article he queries as to how we might increase empathy – in the world and in ourselves. After discussing the ‘science’ of how people and organizations successfully manipulate the public in gaining support, whether financial or otherwise, he rightly argues that the only way for our hearts to be drawn to those suffering comes when we enter into it – whether through some form of involvement (like short-term service trips), or by simply meditating or praying over the fact that there is pain in the world.

This is not a new concept to the gospel. At the heart of our Faith is a God who has entered into a broken world. In choosing not to sterilize the planet before coming, Jesus demonstrated that love is not a risk-free enterprise. In fact I am convinced that the greatest obstacle to belief for many is the repulsion that comes with associating a pure God with a messy human condition. Keeping God at a distance is like posting touched-up photos on Instagram – Everyone looks better from far away.

All of which leads to politics – our national obsession. Politics, when reduced to rhetoric is a convenient, ideological way of staying safely far from people and suffering. Rather than get our hands dirty we rattle our sabers, vote, and then pat ourselves on our backs, feeling as though we have done something good for the world.

Don’t get me wrong, I love political debate, and vote every election. And there is a place for political activism. Activism led to the abolition of slavery in England, gave women the right to vote here, and ended wrongful child labor practices. In these cases Christians, along with unbelievers, embraced justice – and one another. They worked through differences for higher callings.

Because the world changes when people get their hands dirty and serve, regardless of politics. But toxic partisan rhetoric changes nothing. It twists words, demonizes flawed humans, divides and polarizes.

Frankly, parsing the National Prayer Breakfast is a colossal waste of time in my opinion.

Maybe this is a good way of looking at it: Imagine with me a horrible event where one of your children or friends is moments away from death unless they are delivered from some catastrophic circumstance. And imagine with me that the only person who can rescue them shares none of your political, theological or ideological values. Will you restrain them from saving your loved one?

Friends, Love is up close. It gets so near that distinctives and differences give way to breath, sweat, smell and heat – humanness.

Jesus has modeled that we are called to something more personal than cheap politics, and He warned against frothing over ‘Caesar’ (Mark 12:13-17). Every generation bewails the political landscape, but I want to encourage you to find something deeper to care about, nobler to aspire to and much more human to fight for.

In doing so, politics will give way to living, breathing, human expressions of the gospel.

Our world can only receive this as good news… 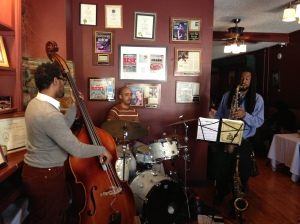 I cannot sit idly by in Atlanta and not be concerned about what happens in Birmingham. Injustice anywhere is a threat to justice everywhere. We are caught in an inescapable network of mutuality, tied in a single garment of destiny. Whatever affects one directly affects all indirectly.

I celebrate Black History Month. Quietly, but joyfully. Each February I encourage our church members to do so as well, not only in heart, but also by taking in the culture, the food, the readings and the stories, often accompanied by a shameless plea to our African American brothers and sisters for a taste of the cuisine.

This year one of our families took this to heart and brought us to Darker Than Blue, a wonderful Soul Food restaurant in Baltimore, replete with live Jazz (pictured) and the lovely and peaceful atmosphere of a quaint dining establishment. And I was delighted when a member told me that she is reading through Uncle Tom’s Cabin.

I can tell you that we have been the beneficiaries of much more than good meals and evenings together. It is as though we have been welcomed into a trust forged out of pain and suffering.

A few years ago a friend asked why I do this, and why not other ethnicities that have experienced pain in their histories – a question worth considering. In answering, it may be worth starting with my own background.

In the early 20th Century the Ottoman Turks invaded Armenia and my grandparents (on both sides) were driven away by threat of death. One and a half million Armenians died in this attempted genocide, and the world’s relative indifference to their suffering became Hitler’s rationale for his ‘Final Solution’ (his plan for exterminating the Jews), to his skeptics.

My grandparents came to America by different routes, some via Iran and others through Egypt – all eventually came ashore at Ellis Island. America’s shores were open to them as with other people groups with dreams for living on our soil. They didn’t have to come – they chose to. And so Armenians celebrate being Armenians with Armenians!

We celebrate Black History as a nation because those who came from Africa didn’t have this luxury. They were forced to America by the slave trade. Men and women, boys and girls were treated like animals, considered property that could legally be beaten, raped, sold, even murdered. They were sold and auctioned publicly. Their ‘owners’ determined the limits of their rights as humans. The Slaves’ children were destined to the same oppressive existence.

Growing up in the sixties and seventies I remember the national and local tensions of the Civil Rights Movement, and then the Black Power Movement. The explanations from a white-leaning media. The rationalizations. The revisionist history. The images. The violence. The deplorable indifference to documented acts of injustice and cruelty. Jim Crow laws.

We’ve had the privilege of hearing stories from those who were ‘there,’ the stories behind the food and the stories of faith and resolve in the face of obvious national unrighteousness. A Vietnam Vet who, along with fellow black soldiers, constantly found themselves put on the most dangerous side of missions. A woman whose sister went to jail in Selma, and who herself rode the Freedom Buses. The stories are real, and the history is recent.

We deplore human trafficking today because we finally acknowledged the deep sin of our nation’s involvement in the slave trade, and then its nasty implications more than a century past Abolition.

But it wasn’t only a nation.

It was the Church too.

Many bought into the lie that said that one human being carried less value than another, simply based on the color of her skin – while teaching that ‘all ground is level at the foot of the Cross.’ From a Birmingham Jail Dr. Martin Luther King wrote, pleading local white pastors and churches to strong, persistent and determined action.

We celebrate courageous people like Rosa Parks, Frederick Douglass, Dr. King and Harriet Tubman because they acted out of their conviction for justice when it was costly and they were quite alone.

But they shouldn’t have been.

So we celebrate. If we were not to celebrate then we would have no right to plead the cause of the unborn, or call the Church to care for the plight of the weak. We celebrate to not forget or grow cold and indifferent to the injustices we could otherwise so easily pretend to not notice. We celebrate because the gospel freshly informs us that there is neither Jew nor Greek, there is neither slave nor free, there is no male and female, for you are all one in Christ Jesus (Galatians 3:28).

And this is our good news…

You are currently browsing the Black History Month category at unfinished1.