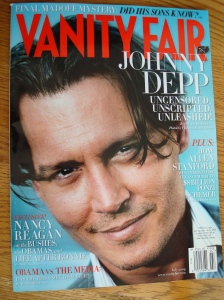 This past week, on a flight from Orlando, Florida to Baltimore I read an interview with Johnny Depp in Vanity Fair magazine.  Through the years our family has enjoyed several of his movies.  In the interview Depp describes his life, his acting career and his future hopes.  Depp lives one of those, only-if-you-have-zillions-of-dollars lifestyles.  He owns homes in Europe and he often escapes to an island in the Caribbean that he purchased (that’s right, an entire island) that is situated next to another island he owns, I assume for the purpose of buffering anyone from living ‘next door.’  He spends his days traveling on his massive yacht (with full staff), playing guitar, painting, reading and listening to music – not to mention taking time for vacation with his family.

Somewhere in the article Depp reveals his heroes.  In fact he has named the coasts and various alcoves of the island after them.  They include actor Marlon Brando and journalist Hunter S. Thompson, to name two, both dead, Thompson by his own hand in 2005.

I wasn’t a Thompson reader, but certainly loved some of Brando’s roles, however what struck me was how Depp found ways to sort of elevate the reputations of these guys in his own mind – to make them larger than life.

And then there is Jesus.  The humility the prophets wrote of, and then His contemporaries witnessed, have never been expunged from His story.  He is still presented as the ‘suffering servant,’ the humiliated one, and as one ‘despised and rejected by men’ (Isaiah 53:3).  His dark moment in the Garden of Gethsemane has not been prettied up, nor His humiliating death erased from the woof and weft of the narrative.

Today it occurred to me that one day someone will do with Depp what he has done with his heroes.  They will take the highlights and make them the entire reality, while Jesus directs us to the ‘lowlights’ of His earthly journey, and then invites us to find a God who refused to live above our condition.

§ One Response to Jack Sparrow & Jesus

You are currently reading Jack Sparrow & Jesus at unfinished1.