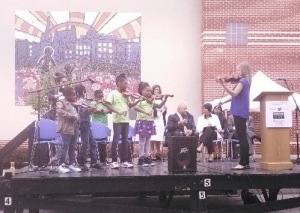 “…there is something beautiful and concrete and well-proportioned about tending that size of a garden.” David Brooks, The Small, Happy Life

Yesterday a mural mosaic was dedicated in a barely-conspicuous outdoor neighborhood service. The mural is visible to all who walk by the New Song Academy. It was constructed by the children of the Academy, under the guidance of a group called, Art with a Heart, a group that works in the City of Baltimore and teaches vulnerable children and adults through creativity. What makes the mosaic special is that the Academy resides in Sandtown, the neighborhood that was the flashpoint for the Baltimore riots in April. I have written about it here.

In a NYT OP-ED piece, David Brooks reported surprise at how many people responded to a survey, with the desire for what he termed, ‘the small, happy life,’ as opposed to what might seem to be more ambitious pursuits.

When I was in sixth grade, our teacher, Mrs. Hill, became weary with a group of us troublemakers. We happened to live in an area that was booming in development, and so she decided to take us around the community collecting tile for the purpose of making a mosaic for our elementary school, which we did. Over a period of months we stayed after school as she brilliantly channeled our energy into creativity. Eventually the completed project was erected at Coral Reef Elementary, like the one at New Song Academy.

One day, in response to His disciples’ request to increase their faith (because they were thinking big!), Jesus replied, “If you have faith as small as a mustard seed, you can say to this mulberry tree, ‘Be uprooted and planted in the sea,’ and it will obey you” (Luke 17:6). Contrary to the claims of train wreck preachers who promise the moon and deliver disappointment, Jesus was simply saying, ‘Start small, because that is where we are.’ Put another way, ‘Start where you are, and offer what you have rather than what you don’t have.’

A cursory study of history will bear this out, whether with those who harbored Jews during the Holocaust, or others who have accomplished amazing feats of bravery, rescue, influence and impact. And there is always that ‘small step’ and ‘giant leap’ for mankind. Never do you hear braggadocio. Time and again we are introduced to humble people who merely did what they could in the moment. In the moment, the small was enormous.

Way back in 1960-something I learned that a mosaic is nothing more than a well-orchestrated outlay of broken tiles. It doesn’t take much for those seemingly worthless, jagged and often-dirty shards to become something wildly beautiful – like a scene from the coral reef, or a vision of a healed city. Every piece matters, and no tile is too damaged, in the same way that one simple mosaic on one part of one wall on one building in one neighborhood in a broken community can be that tiny piece that offers hope for something lovelier.

And it is for this reason that in Jesus God became small. Because we are small. Yet because we are adored by the Father, we are not insignificant.

You are currently reading Broken Tiles at unfinished1.